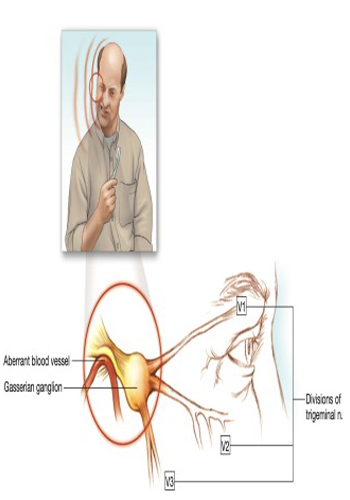 Clinical Syndrome
Trigeminal neuralgia is caused in many patients by convoluted blood vessels that compress the trigeminal root as they exit the brain stem. Acoustic neuromas, cholesteatomas, aneurysms, angiomas, and bone abnormalities It can also cause nerve compression. The severity of pain caused by trigeminal neuralgia only competes with cluster headaches. Uncontrollable pain has been associated with suicide and should therefore be treated promptly. should be done. Attacks can be triggered by daily activities that involve contact with the face, such as tooth brushing, shaving, and washing. In most patients, pain can be controlled with medications. In about 2% to 3% of patients with trigeminal neuralgia There is also multiple sclerosis. Trigeminal neuralgia is also called tic douloureux. Trigeminal neuralgia causes episodic pain affecting areas of the face supplied by the trigeminal nerve. Pain is unilateral in 97% of cases; When it occurs bilaterally, the same branch of the nerve is affected on both sides. The second or third branch of the nerve is affected in most patients, and less than 5% of the first branch is affected. In 57% of unilateral cases pain develops on the right side of the face. The pain is characterized by electric shock-like paroxysms lasting from a few seconds to 2 minutes. Progress from the beginning to the top is actually instantaneous. Patients with trigeminal neuralgia, They try very hard to avoid any contact with the triggered areas. Conversely, people with other types of facial pain, such as temporomandibular joint dysfunction, may experience constant rubbing of the affected area or heat or cold to it. tends to apply. Patients with uncontrolled trigeminal neuralgia, often requires hospitalization for rapid control of pain. Between attacks, patients are relatively painless. Remaining after severe pain subsides Mild pain may indicate permanent compression of the nerve by a structural lesion. This disease is almost never seen in people under the age of 30 unless it is associated with multiple sclerosis. with trigeminal neuralgia Patients often have severe depression (sometimes suicidal) with high levels of overlapping anxiety during acute attacks. Both of these problems often accompany painful periods. may worsen due to sleep deprivation. Patients with coexisting multiple sclerosis may exhibit the euphoric dementia feature of this disease. Doctors tell people with trigeminal neuralgia that the pain is almost should always be assured that it can be controlled.

Treatment
Medication
Carbamazepine is considered the first-line therapy in trigeminal neuralgia. In fact, a rapid response to this drug essentially confirms the clinical diagnosis. The safety and efficacy of carbamazepine however, some confusion and anxieties have surrounded its use. This drug, which may be the patient’s best chance for pain control, is sometimes discontinued because of laboratory abnormalities that are erroneously attributed to it. Therefore, basic measurements consisting of complete blood count, urinalysis and automatic blood chemistry profile should be taken before starting the drug. If the pain is not out of control, with an initial dose of 100 to 200 mg at bedtime for 2 nights Carbamazepine should be started slowly. The patient should be warned about side effects such as dizziness, sedation, confusion and rash. The drug should be administered until the pain is relieved or a total dose of 1200 mg / day is reached, as the side effects allow. until, It is increased in increments of 100 to 200 mg given in equally divided doses over 2 days. Careful monitoring of laboratory parameters is imperative to avoid the rare possibility of life-threatening blood dyscrasias. This drug should be discontinued at the first sign of blood count abnormality or rash. Failure to monitor patients taking carbamazepine can be disastrous because aplastic anemia can occur. When pain is relieved, without considering drug reduction The patient should be kept at this dose of carbamazepine for at least 6 months beforehand. The patient should be informed that under no circumstances should the drug dose be changed or refilled or discontinued without informing the physician.

Gabapentin
In rare cases where carbamazepine does not adequately control the patient’s pain, gabapentin may be considered. As with carbamazepine, initial blood tests should be performed prior to initiation of therapy and the patient should experience dizziness, should be warned about possible side effects such as sedation, confusion and rash. The starting dose of gabapentin is 300 mg at bedtime for 2 nights. The drug is then administered until the pain is relieved or a total dose of 2400 mg/day is reached. increase in increments of 300 mg given in equally divided doses over 2 days, as side effects allow. At this point, if the patient has experienced only partial pain relief, blood values are measured and the drug is administered at 100 mg. Titrate upwards carefully using tablets. Rarely a dose greater than 3600 mg/day is required Baclofen
Baclofen may be of value in some patients who cannot recover from carbamazepine or gabapentin. As with these drugs, basic laboratory tests should be performed before starting baclofen therapy and the patient should be treated with the same potential. Be warned about side effects. The patient begins with a dose of 10 mg at bedtime for 2 nights; then the drug is administered for 7 days as side effects permit, until the pain is relieved or a total dose of 100 mg/day is reached. increased in 10 mg increments given in equally divided doses. This drug has significant hepatic and central nervous system side effects, including weakness and sedation. As with carbamazepine, when using baclofen laboratory values need to be carefully monitored. When treating individuals with any of these drugs, the physician should be aware that the patient’s early discontinuation or discontinuation of the drug may result in relapse of pain and that this should be controlled. He should make sure that he knows it will be more difficult to do.

INVASIVE TREATMENTS
Trigeminal Nerve Block
The use of trigeminal nerve block together with local anesthetic and steroid is excellent for drug treatment of trigeminal neuralgia. is a complement. This technique quickly relieves pain while drugs are titrated to effective levels. The first block is performed with preservative-free bupivacaine combined with methylprednisolone. next day nerve blocks are performed in a similar way, but using a lower dose of methylprednisolone. This approach can also be used to control severe pain.