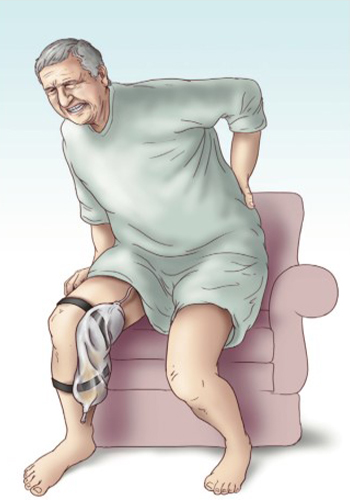 Clinical Syndrome
Discitis is a frequently misdiagnosed cause of spinal pain. If left undiagnosed, it can cause paralysis or life-threatening complications. There may be dyschitis of any part of the spine as with the lumbar spine, the second most common is also the cervical spine. Discitis can be hematogenous from the Batson plexus to the spinal epidural space as a result of urinary tract infections; more commonly, surgery, it occurs after interventional operations on the spine, including discography and epidural nerve blocks. The infectious agents most often responsible for discitis are the same agents that cause urinary tract infections. Literature, he suggested that the administration of steroids into the epidural space causes immunosuppression, as a result of which there is an increase in the incidence of discitis. Although this proposal is theoretically reasonable, the United States in the face of statistical data on thousands of epidural steroid injections performed daily in and around the country, this theory may be questioned. Dyschitis; E/K: 2/1 in adult patients, and the average age of occurrence in children is approximately it is 7, and in adults it is the fifth decatel. If left untreated, the mortality rate associated with dyschitis approaches 10%. In a patient with discitis, it is initially determined that the segment of the affected spine (eg, cervical, thoracic or lumbar) pain and paraspinous with spasm of the muscles, it res november. This pain becomes more intense and localized, as the infection involves more discs and adjacent vertebral bodies and compresses the nerve structures. Low-grade fever, weakness and loss of appetite mild symptoms such as; high-grade fever, chills, and sepsis may progress. At this point, the patient begins to experience sensory and motor deficits, as well as intestinal and bladder symptoms as a result of his nervous involvement. As the infection continues to expand into the epidural space, in the vascular structures leading to the affected spinal cord and nerve, with spinal cord infarction and persistent neurological deficits due to the resulting untreated ischemia a danger occurs. The patient with dyschitis initially presents with pain in the area of infection. At this stage, the affected spine may experience slight pain according to the angle of movement. Neurological examination is within normal limits. Low a moderate fever or night sweats may be noted.

Treatment
In order to avoid conditions that can lead to permanent neurological deficit or death, it is imperative to start treatment for discitis quickly. Treatment of discitis Treatment of infection with antibiotics and treatment of neural structures it has two main goals – as a drainage of any abscess formation, to relieve pressure on it. Because most cases of dyschitis are caused by Staphylococcus aureus, such as vancomycin, which treats staphylococcal infection antibiotics should be started immediately after taking blood and urine culture samples. Antibiotherapy can be customized according to culture and sensitivity reports. As mentioned, as part of the differential diagnosis of dyschitis if it is being evaluated, antibiotic therapy should not be delayed while waiting for an accurate diagnosis. Many atypical infectious agents (for example, Mycobacterium tuberculosis, fungi) can cause dyskinesia, especially in immunosuppressed patients and such pathogens should be considered in patients who have not responded to treatment with conventional antibiotic regimens. Bed rest and the use of orthopedic devices to stabilize the affected spinal segments, it should help improve the long-term results of patients suffering from it.